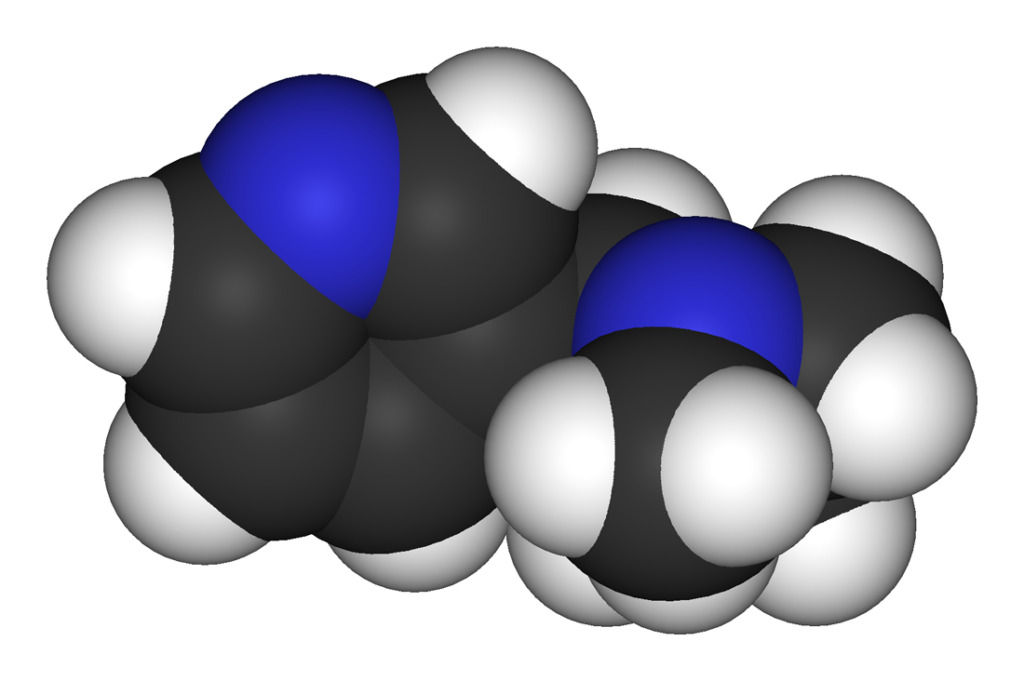 And now it’s time for the drug of the week, where we dive into the science, history, uses, and recent trends in a different drug each episode. This week we return to the world of legal drugs, focusing on one that’s even more addictive than most illegal substances and for which societal attitudes have changed greatly in recent decades: nicotine.

What exactly is it? Where does it come from in nature, how is it turned into useable form? How is it consumed?

To start off, what exactly is nicotine? Chemically, it’s an alkaloid, a naturally occurring compound made mostly out of Nitrogen atoms. It affects the parasympathetic nervous system in animals and is found in the nightshade family of plants, which includes Nicotiana tabacum, the species of tobacco that is most widely grown commercially. In some parts of the world, the more potent Nicotiana rustica is also grown for human consumption. Nicotine is most concentrated in the leaves of these plants, which use it as a way to ward off herbivores. This property is actually so effective that nicotine used to be used as an insecticide.

Only a minimal amount of processing is needed for tobacco to be turned into a form where humans can ingest its nicotine – you simply need to pick the leaves, dry them, grind them up, and smoke them. The leaves can also be chewed, much like coca leaves. However, the process for mass-produced cigarettes or chewing tobacco is much more complicated, and a cigarette bought in a convenience store contains much more than just dried tobacco. There are some really great in-depth looks at the entire process out there, and I really liked History Channel’s Modern Marvels episode on it. But to sum it up, tobacco is treated and combined with a lot of different additives, such as sugar to mask its bitter taste and ammonia to make the nicotine more readily absorbable by the human body. These additives are the source of a lot of the health harms of smoking, but make the actual experience more enjoyable than just smoking straight tobacco.

While smoking is the main method of administration for nicotine, it can also be added to gum or put on transdermal patches, but these delivery systems are usually to help people wean off of smoking, not something people do in their own right. But as a quick aside, a friend once told me about a guy he worked with who went straight to nicotine gum because he liked the buzz but hated smoking – so while there may be a few others out there like him, they’re a small minority of the market. E-cigarettes are really the only nicotine delivery alternative to smoking that some people enjoy, though fears of them leading to a huge surge in nicotine use seem largely overstated.

What is the science behind how it interacts with the body? What receptors does it influence? What are the medical effects of it, potential side effects?

So how does nicotine actually interact with your body? Well, it’s absorbed through your skin and mucosal linings and into your bloodstream, which is why smoking it is so effective – there are a lot of surface area in your lungs, letting nicotine absorb much more quickly than other methods like your stomach. You feel nicotine’s effects within ten seconds of taking a drag from a cigarette, and it lingers in your body for a few hours afterwards.

Once in your bloodstream, nicotine gets to your brain and makes it produce epinephrine and dopamine. Epinephrine is also known as adrenaline, and stimulates your body – speeding up your heart rate, making you more alert, and some say more aroused. Dopamine connects to the pleasure centers of your brain and is a big part of why nicotine is so addictive.

Since nicotine originally comes from tobacco, and smoking is still the most popular way to consume it, it’s easy to conflate the two. But it’s important to make a distinction between nicotine and tobacco, especially when it comes to their health effects, especially now that tobacco-free nicotine products like e-cigs are getting more popular and we need to understand what exactly they do to your body and how they should be regulated. It’s now the clear scientific consensus that smoking tobacco is very harmful to your health, greatly increasing the risk of cancer and other serious diseases. According to the Centers for Disease Control, “Cigarette smoking is responsible for more than 480,000 deaths per year in the United States, including an estimated 41,000 deaths resulting from secondhand smoke exposure. This is about one in five deaths annually, or 1,300 deaths every day.” That was about the size of my high school, so 1300 deaths a day is still awful, but this has actually declined a lot as fewer people smoke. Taking a global perspective, it kills about 6 million people per year, and that number is actually still increasing.

But when separated from tobacco, nicotine is much less harmful. It simply acts as a mild stimulant and has some negative effects like raising your blood pressure and constricting your arteries. But it’s not a known carcinogen, and the cancer-causing effects of smoking come from other chemicals and substances in tobacco. It’s also difficult to overdose on – you absorb about 2 milligrams of nicotine by smoking a typical cigarette, and a lethal dose is somewhere between 30 and 60 milligrams, so you’d have to smoke 15 to 30 cigarettes at the same time to die of nicotine poisoning. Because of that big number, people don’t often die of nicotine poisoning, but it is possible to do if you ingest the highly concentrated liquid nicotine used in vaporizers. There was actually one reported case of a child in New York dying after drinking nicotine fluid this past December, so if you use a vaporizer, make sure to keep your nicotine fluid out of reach and locked up just like you would with medication or alcohol.

Outside of rare cases like this, nicotine itself is not very harmful, so those in the harm reduction community are pushing hard to get people to switch from smoking to vaporizing, even if they never fully quit. Of course, this isn’t to say it’s harmless, but nicotine is highly addictive — comparative studies have found it causes more dependence than alcohol, cocaine, or even heroin, and withdrawal symptoms that are worse than cocaine (but not as bad as heroin or alcohol). But this addictiveness is why many harm reductionists think getting people to switch to e-cigs or other methods is worth our time, since getting people to quit is much more difficult.

History of the drug. When did people start using it? Who uses it now? How have the laws and societal attitudes about it evolved over time?

But as with many drugs, the effort to get people to stop using tobacco is fairly new, so let’s take a minute to dive into the history of nicotine. It was first consumed by humans as early as 8,000 years ago in the Americas, and many Native American tribes used it ceremonially, as with the well-known “peace pipe.” Once Europeans arrived, they brought it back along with coffee and other things they’d never encountered before. In 1560, the French king received a gift of tobacco seeds from ambassador Jean Nicot (that’s N I C O T, and is where nicotine got its name). He and many others thought tobacco had medical uses, and its smoke was used to ward off disease, including the plague (this, of course, was unsuccessful).

Tobacco grew more and more popular in Western culture and spread throughout the world, taking many different forms early on. For example, snuff – which is just pulverized tobacco that is snorted – was incredibly popular among European and American aristocrats for a long time, and people even had decorated cases and other paraphernalia they’d use for it. Though popular, it did have its critics, with one Pope banning snuff use in churches. Snuff declined in popularity over time, and once industrialization made mass production possible, standardized pre-rolled cigarettes became the dominant method of nicotine ingestion. Negative health effects were largely unknown until the mid-1900s, and tobacco companies were able to surpress a lot of research for a few decades. In the US, the government slowly started adding restrictions, butting heads with Big Tobacco along the way. Congress mandated warning labels on tobacco products in 1965, and probably the biggest government action was the 1998 Tobacco Master Settlement Agreement, a deal worked out between tobacco companies and 46 state attorneys general that were suing them. This added even more restrictions on labeling and advertising, and even requires tobacco companies pay the federal government $10 billion a year to support anti-smoking programs.

Recent news and trends. Where are things going?

These programs have actually been very successful, and along with other factors has brought the national smoking rate to the lowest level in modern history. In 1965, 42% of American adults smoked cigarettes, and that number is now under 18%. This is a great lesson for fighting other highly addictive drugs like opiates today, as the drop in tobacco use was accomplished through sensible regulations and education programs, not arresting smokers and locking up tobacco growers for life.

Along with the massive drops in tobacco use, another interesting trend is the rise of vaporizing as I mentioned before. They came on the market in 2006, and it’s now estimated that 20 million Americans have tried them at least once. Vaping is now more popular than cigarette smoking among young people, with 13% of high schoolers reporting e-cigarette use in 2014 compared to only 9% reporting smoking traditional cigarettes, meaning some people are going straight to e-cigs without ever smoking. This has scared some public health officials, but it’s actually a good sign that if young people are going to be using nicotine, at least they’re going for the less dangerous method of delivery.

More research needs to be done on the long-term health effects of e-cigarettes since they’re so new, but early studies do point to them being much safer. With the rise of patches and other products that deliver nicotine alone, more research is being done on the effects of nicotine (as opposed to the effects of smoking), with some interesting results. Studies show nicotine can help prevent and treat Parkinson’s Disease, and the Michael J. Fox Foundation is supporting more research on it. Other studies have found it helps treat early Alzheimer’s and could even improve attention and memory in healthy people, though these are still in the early stages so it’s not a good idea to go buy some nicotine patches to try to make yourself smarter.

This has been Sam Tracy with our drug of the week, nicotine. Tune in next week for a look at a much stronger stimulant that the government has taken a very different approach to eradicating, cocaine.