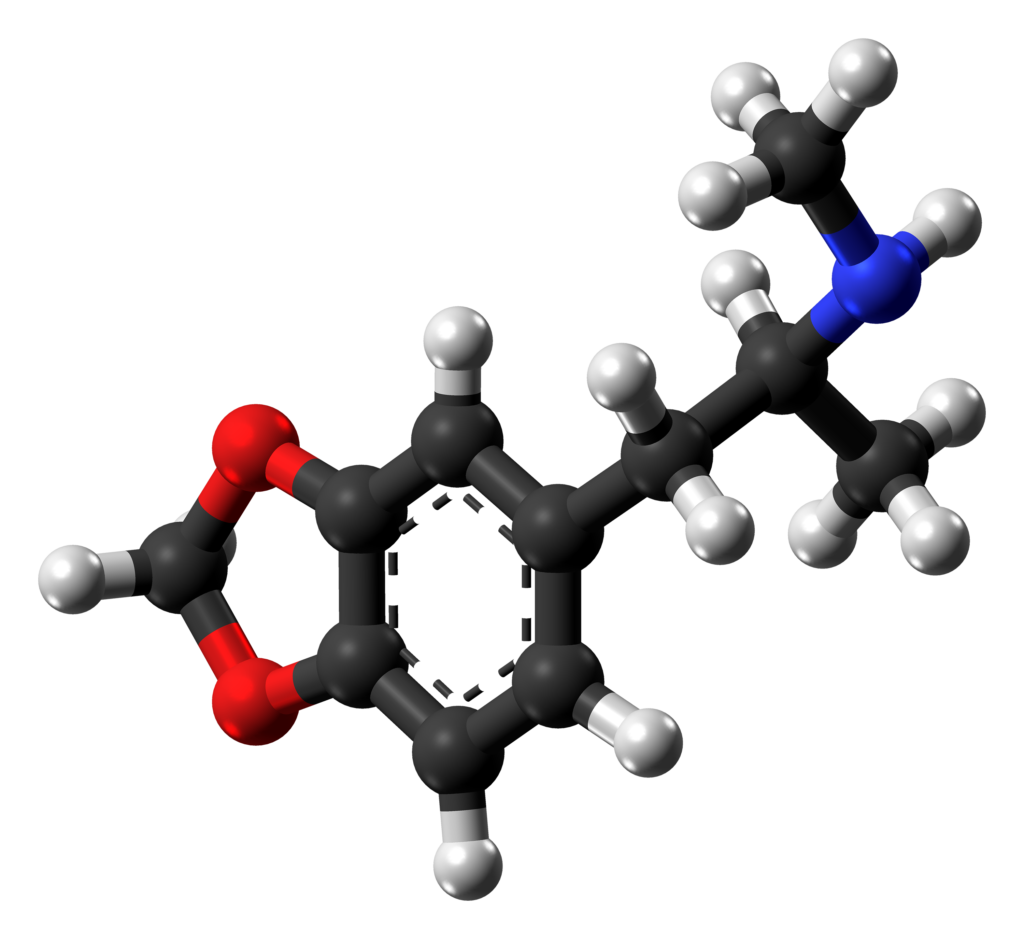 And now it’s time for the Drug of the Week, where we look into the origins, science, history, legal status, and current uses of a different drug each week. So far we’ve already addressed alcohol and marijuana, but for this, our third episode, we’re finally diving into one that’s highly illegal, not as widely used as marijuana, and is surrounded by fear and misunderstanding: MDMA.

Now a lot of news stories will say “MDMA, also known as ecstasy,” but that’s not quite right. While MDMA is the main ingredient in ecstasy, it also includes many adulterants that help get it into tablet form. Pure MDMA is often referred to as “Molly,” which exists as a white powder. But you need to be careful, because what is typically sold as molly on the black market today is far from pure, and often includes chemicals that are similar to, but not exactly, MDMA.

What exactly is it? Where does it come from in nature, how is it turned into useable form? How is it consumed?

So what is MDMA? To start, it’s name is short for 3,4-methylenedioxy-methamphetamine. MDMA is created through a chemical process that involves lots of ingredients and reactions, some of which require serious knowledge and equipment to do properly and can be quite dangerous for someone to try at home. The main precursor (which is kind of a fancy way of saying ingredient) is safrole, which is this oily liquid extracted from the bark or the fruit of sassafras plants. Safrole used to be used as an additive in root beer and perfumes, but after it was discovered to be carcinogenic the FDA banned it, though recent studies have actually cast some doubt on whether it causes cancer in humans the same way it does in rat experiments. But now that it’s known as a precursor to MDMA, safrole considered to be a “List I” chemical by the DEA and has a similar classification under United Nations. This is different than Schedule I, as the schedules are for the drugs themselves and the lists are for the chemicals used to make them. Other things in List I include pseudoephedrine and methylamine, which Breaking Bad fans will recognize as two different precursors that Walter White used to make crystal meth.

It can be consumed orally by itself but it tastes really bitter and gross, so people usually put it in gel capsules to swallow. MDMA powder can also be snorted, which gets it into your bloodstream more quickly than through your stomach.

What is the science behind how it interacts with the body? What receptors does it influence? What are the medical effects of it, potential side effects?

So once inside your body, MDMA acts as a serotonin-norepinephrine-dopamine releasing agent.  As you may be familiar, serotonin and dopamine are hormones that make you feel happy, while norepinephrine contributes to concentration and alertness. Other effects of MDMA include increased empathy, friendliness, and a feeling of understanding and connecting with others. This is why it’s often referred to as “the hug drug.” Its effects typically last 3 or 4 hours, with the peak effects about 90 minutes after consumption.

And to combat some misconceptions, MDMA doesn’t cause hallucinations like LSD or other psychedelics, and it also does not impair coordination or judgment. Users are typically quite lucid and able to perform normal tasks without any problems. Due to the chemistry of MDMA, your body quickly builds up a tolerance to its effects, significantly reducing its impact if it’s used two or three days in a row. Because of this, no one really gets hooked on MDMA in the sense that they’re physically addicted and using it daily. However, use can become problematic if people use it every week or two, with frequent use like that being linked to depression and other mental health problems.

There have also been some deaths associated with MDMA, though these are more the cause of its side effects rather than being caused by the drug itself. As it increases your heart rate and body temperature, and is frequently used in a rave or party setting where people are dancing in a hot space and not drinking much water, it can easily lead to heat stroke and dehydration. When used responsibly MDMA is actually a rather safe drug, with UK government drug advisor David Nutt ranking it 18 out of 20 in a list of the harmfulness of commonly used substances.

As MDMA is a Schedule I drug, there aren’t any currently accepted medical uses, but there is a lot of great research being done that show promise for it being used as a treatment for PTSD and anxiety. Because it helps people feel comfortable and connect with others, and its quickly building tolerance, these treatments are done in a controlled setting with a therapist only a handful of times (rather than being a medication that the patient would take home and take while going about their life).

History of the drug. When did people start using it? Who uses it now? How have the laws and societal attitudes about it evolved over time?

MDMA was invented by German pharmaceutical giant Merck way back in 1912, which then patented it. But they were only using it for research and to create other chemicals, not producing it for human consumption. That didn’t happen until the 1960s, when chemist Sasha Shulgin synthesized it for the American company Dow Chemical. After hearing about its effects from others he had shared the instructions with. He eventually tried it himself and was amazed by its effects, and continued to do a lot of research on its chemistry, and share it with psychiatrists and others who studied its medical uses.

As it was legal at the time, MDMA spread quickly among communities of therapists and others who were experimenting with it and trying to use its effects to help people. Due to its success, it became more popular among researchers with its notoriety eventually increasing to the point that it began to be used more recreationally. This led the Drug Enforcement Administration to take notice, and without consulting the medical community — one official was even quoted saying they weren’t aware of the research being done on its medical uses — the DEA classified it as a Schedule I drug in 1985. It is now heavily criminalized, with harsh penalties for even possessing small quantities.

Of course, like all illegal drugs, it stayed popular after its ban. MDMA became associated with rave culture and is now tied in with music festivals and EDM. For 2012, the UN estimated that between 10 and 28 million people across the world used MDMA at least once. According to the Monitoring the Future Study, which surveys American youth about their drug use, 5.6% of high school seniors report having ever tried MDMA. Another survey found that 6.4% of Americans over 25 years old report ever having used it, while only half a percent report using it in the past year.

Recently, there has also been a resurgence in medical research on the therapeutic benefits of MDMA. A great organization called MAPS, which stands for the Multidisciplinary Association for Psychedelic Studies, is currently undergoing federally approved research on MDMA-assisted psychotherapy for PTSD and anxiety. Their goal is to make it an FDA-approved prescription medicine by 2021.

Recent news and trends. Where are things going?

On the political side, there is also an ongoing push to change federal policies that make MDMA use more harmful. This campaign, called Amend the RAVE Act, is fighting to get rid of laws that discourage music venues from providing drug education, free water, and cool-down spaces out of fears for “maintaining a drug-involved premises.” Since most deaths and harms from MDMA are due to heat stroke, encouraging event organizers to help prevent overheating is the best way to save lives.

One other exciting development is the production of a feature film, called MDMA the Movie, exploring the drug’s history and uses. They just raised $50,000 on Indiegogo and are still putting it together, with an anticipated release date of summer 2016. From the clips they’ve posted so far it looks like it will be fantastic, so keep your eye out for it when it comes out next year. Hopefully it will help clear up a lot of misconceptions and improve the national discussion on this popular drug, and maybe even move us a bit closer to serious reform.